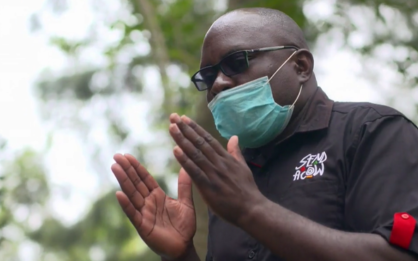 The second programme in the series, hosted by Britain’s favourite botanist James Wong, focuses on the importance of diversification, and looks at the world’s most popular banana – the Cavendish – which has been a staple food and cash crop in Kenya, but which is threatened by disease and drought.

New banana varieties are being tested in Kenya, and Isaac is leading our work in encouraging farmers to grow and propagate them as part of the variety on their farms. You’ll see in the programme how effective that roll-out has been.

The programme goes to air on BBC World News on Saturday 6 February, and is also available to view online.

Isaac has been with Ripple Effect since 2015. Growing up in Butere, in Kakamega County, his family were given a cow by Ripple Effect, and the additional family income allowing him to go to school and get the agricultural training that's the foundation of his work today.

Frankly, we think the BBC were lucky to get Isaac on air; he has presented farming programmes on Kenyan TV ("Shamba Shake Up"!) and talked on radio about good agricultural practices, so when he's out and about he's often greeted by children saying "you're The Farmer!"

Isaac, why are bananas so important in Kenya?

Bananas are one of the staple foods that we rely on: we have cooking varieties that we boil and take it for breakfast, and for lunch – and sometimes also dinner! And it’s also sold for farm income. With a good variety of trees, farmers can sell fruit within one year of planting.

One important thing about the banana is that they come into production mostly when it is dry: when conditions are worst is when you can harvest. So it is one of the best food security crops in our country.

My parents have bananas on the farm where I grew up, and we have ripe bananas all year round as they grow them in relay.

And what have the problems been with bananas?

The Cavendish banana is being wiped out by Panama disease which attacks the leaves and reduces the plant’s ability to photosynthesise – it can destroy a plantation of all one variety.

Here in Kenya we have been testing new FHIA 17 and FHIA 23 varieties which are more resistant to Panama disease, and to drought. The key is diversifying the planting. Most of the farmers we work with are very willing to grow new varieties, but sometimes there are shortages of plants. So we are training farmers in how to micro-propagate suckers, so they can produce many “plantlets”.

Another threat is climate change. The effects are being felt all over the country with farmers having difficulty predicting rainfall, meaning many banana plantlets are damaged because of too much or little rain. Bananas grow best in a range of soils and weather conditions. You can imagine how this unpredictability disrupts steady family incomes because of delayed planting.

To mitigate climate change, our agroforestry methods encourage farmers to plant trees on their farms that are friendly to other crops. They can protect bananas from wind damage, as well as providing shade, firewood and fodder for animals. And they may also act to fix nitrogen in the soil.

Tell us about filming with the BBC 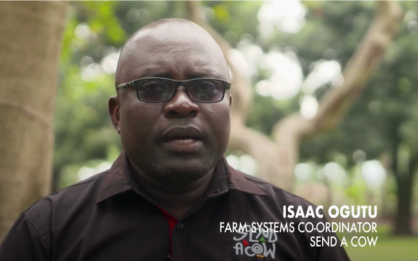 “We were very happy to welcome the film crew to Bungoma and Kakamega for this documentary. Unfortunately the London BBC team couldn’t travel here because of the pandemic, but we kept communicating by WhatsApp and email and eventually the local correspondents came in August last year to do the filming.”

I was somewhat nervous. This is the BBC, it is worldwide... you know the stomach-aches you get when you do such things.

We arranged to meet at 7.30 in the morning: I came very early with our driver, and they arrived exactly on time, which was good because, you know… there is African time and there is British time. We took them to the research organisation where they do tissue culturing. Usually, only the scientists are allowed into the lab but because I was with the BBC, for the first time I was allowed inside to see exactly how they work with the plant tissues to produce plantlets. It was amazing.

When we went out to the farm the BBC had asked to speak to the farmer with us alone. But the farmer had also asked his group members to come, and they welcomed us with songs! But the BBC said that was fine. Then when they got their drone out to film from the air, even more people came out and they were very excited, and I thought ‘Oh no, we’re in trouble…’ But it was okay.

Overall it went very well and I was extremely happy with the support from everyone here, and from Sheila Halder who is farm systems coordinator for Ripple Effect. It’s very good publicity for our work. My three children are very excited to see the programme!